Hi everyone, last time I told you all about our adventurous Tokyo trip. The last two weeks however were far more quiet than our time in Tokyo. The main reason behind it? Japan was under control of a heavy heatwave!

Having read our Tokyo report, you may have realized that we mentioned constantly that it was too hot. And these temperatures not only continued for the last weeks, they have even been increasing. Summer in Japan is usually very hot, rising temperatures and a constant humidity make the experience quite unbearable. However, this year, Japan was suffering from a very strong heatwave, with temperatures above 36 degrees even in northern Hokkaido, which is totally unusual for this area. There were lots of reports of people suffering from heatstroke, a dangerous condition that may even cause death! Officials from the Olympic Committee of Tokyo are now very concerned about the games next year, which will take place in summer. If the temperatures will be the same like this year, the games won’t be any fun. On the contrary, the conditions can be very dangerous for the participating athletes as well as all the volunteers working all day long and the visitors.

I use a special safety app, launched by the government, that warns you about all kind of natural disasters and when I installed it, I had disasters like earthquakes or volcanic eruptions in mind. But this app has been warning me constantly of high temperatures and the danger of heatstroke for the last three weeks! Not very comforting if you ask me… At least, the government takes the temperatures seriously and gives a lot of advice how to cope: stay indoors, don’t engage in activities outside, wear a hat, protect yourself from the sun, drink enough and use air conditioning all the time. And, that’s basically what we did the last weeks! Also, a typhoon (tropical storm) had been approaching and was expected to hit Japan very hard. Luckily, it was not as bad as predicted, but for one day, we experienced hot winds (increasing the temperatures even more) and a lot of rain during the night. The sky looked quite gloomy but there was no damage or floods. 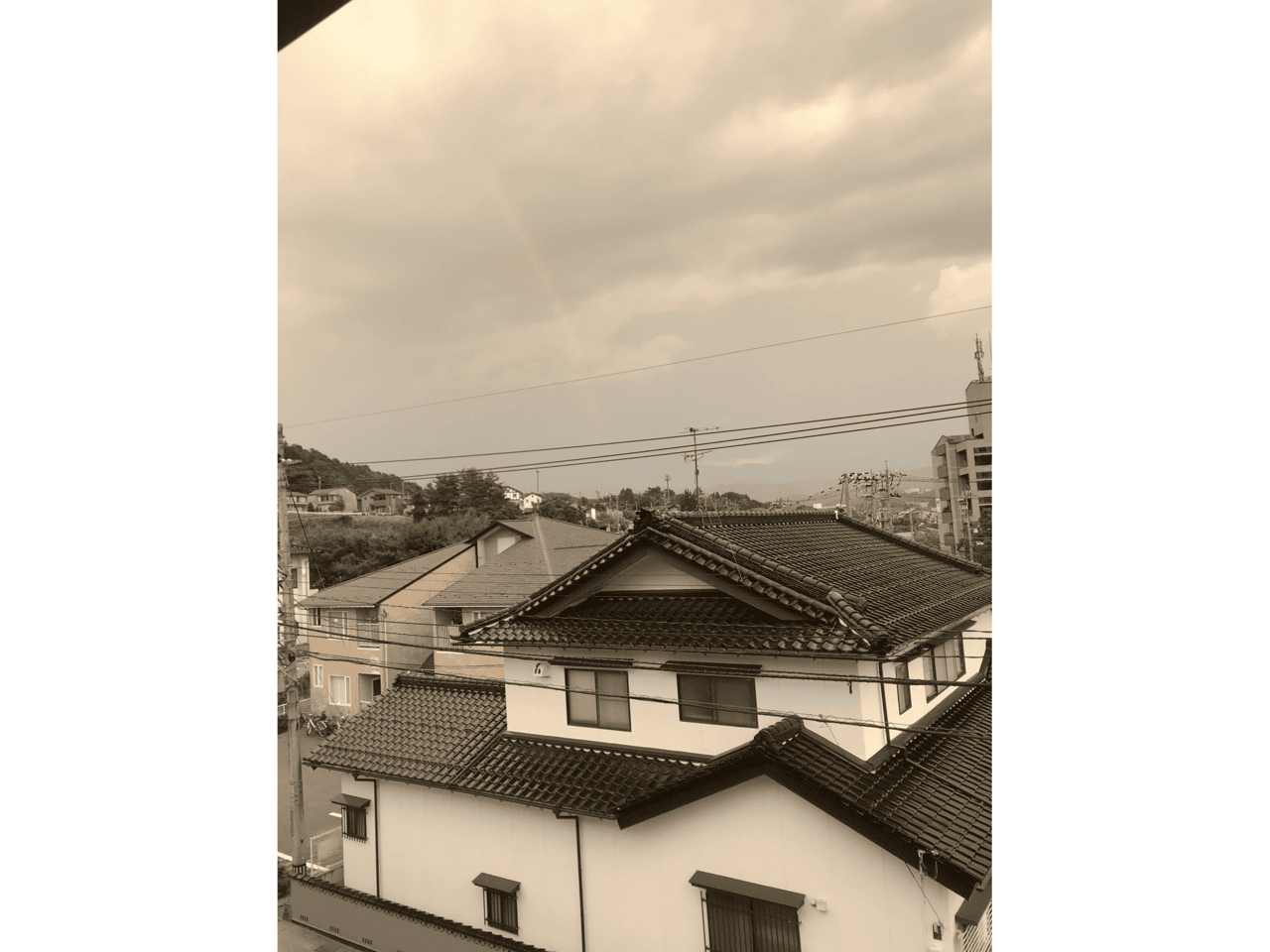 But, anyway, due to the heat, we postponed all our plans for trips and activities and decided to use this time to finally relax a little bit and stay at home. Lucky for us, the Obon holidays were just about to start, so that we could take some time off. Obon takes place in the middle of August and is a nationwide holiday, where the Japanese people visit their home cities and their families to pay respect to their dead ancestors. We had been advised not to travel during this time as all trains would be fully booked and crowded, same for hotels and big cities. The university was shut down during this week (Niklas went there once and was maybe the only one walking around at the grounds. All restaurants and cafeterias were closed, computer servers had been shut down and after a few sad hours alone, he returned home), as were many restaurants and cafés. However, we enjoyed this downtime and didn’t do much. As it was way too hot outside, we mostly stayed indoors (e.g. we went to some coffee shops or stayed at home), trying to deal with the weather as smooth as possible. 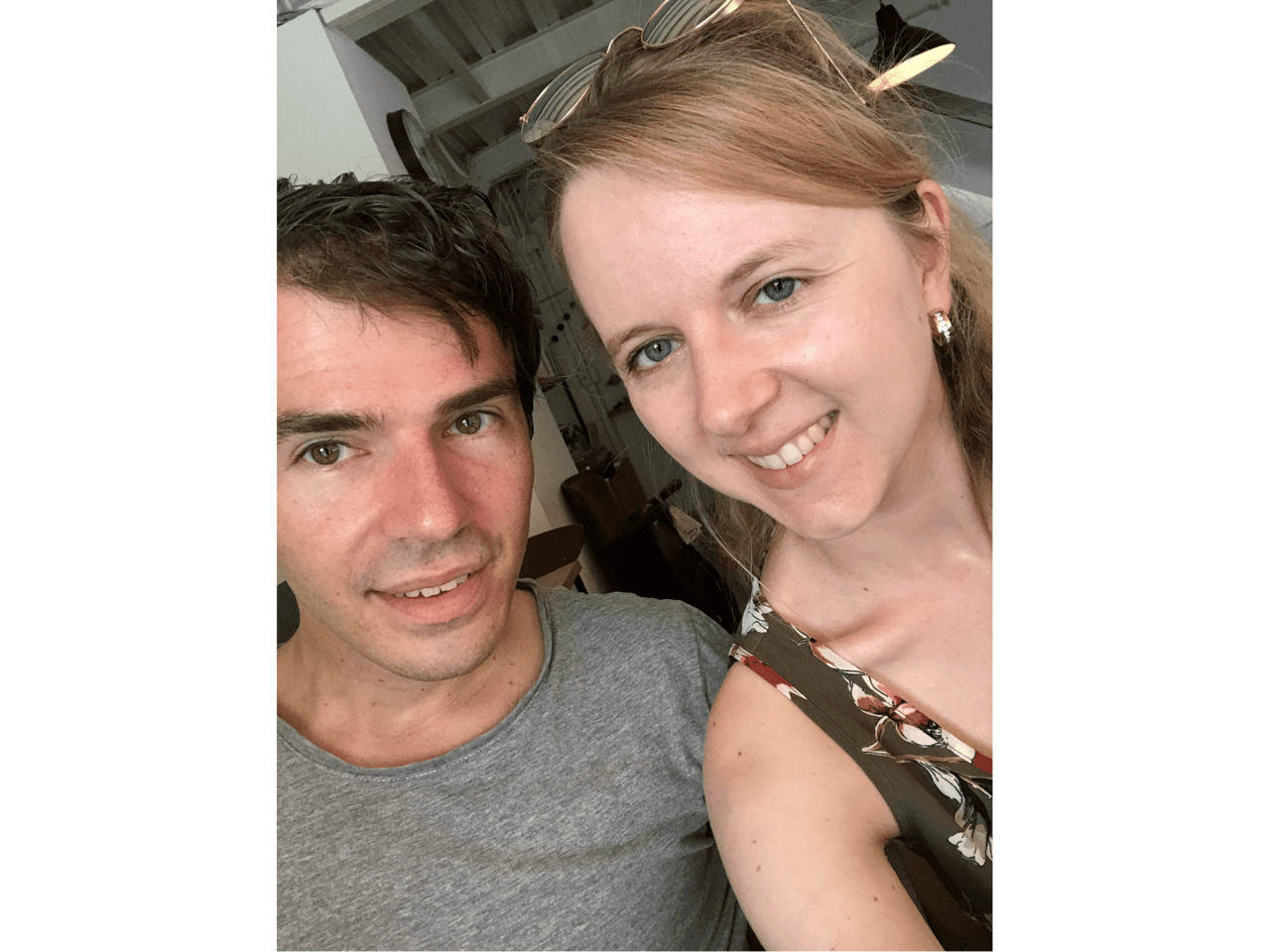 Going out and getting in a cool coffee shop! 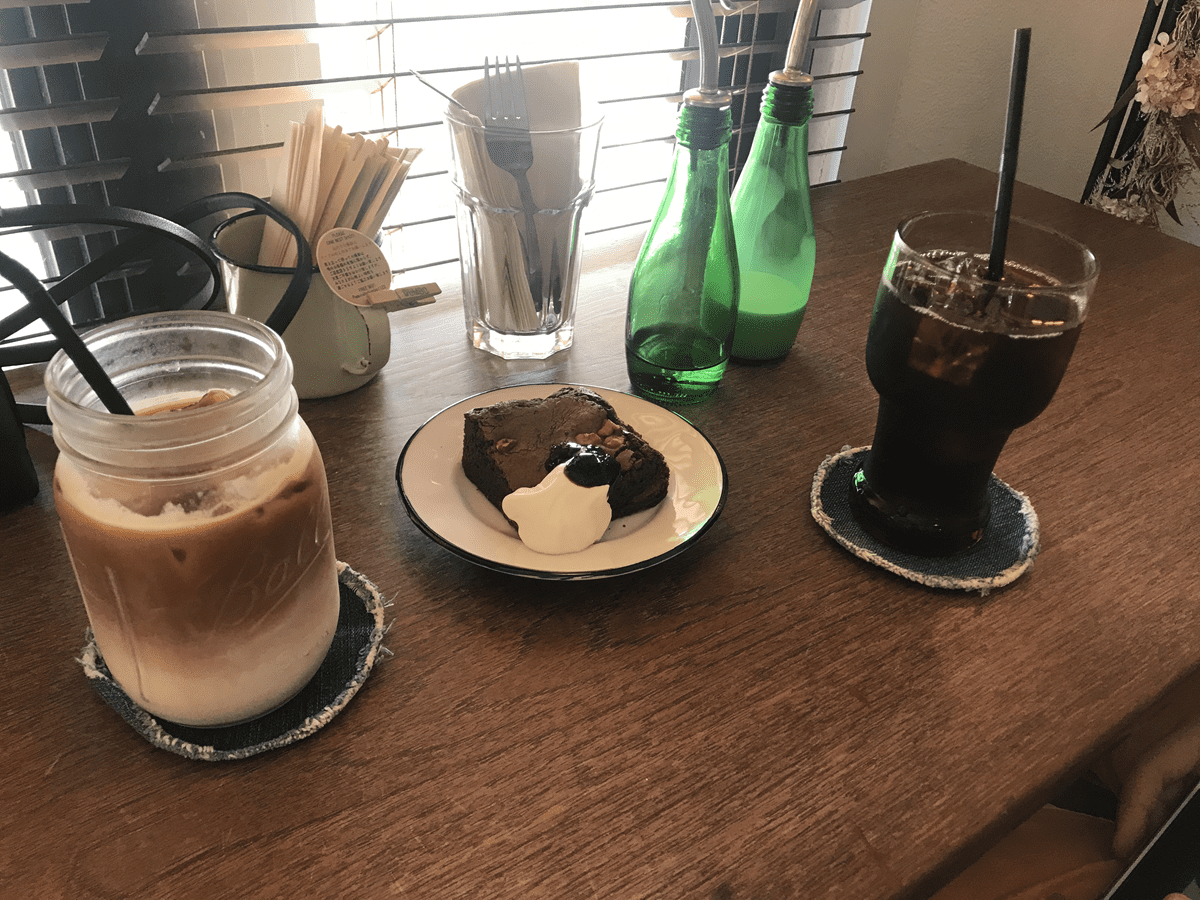 One evening, we went by bike to a cinema next to the station - the biking was kind of scary (switch to the every-day-life section to find out more), but the cinema experience was very interesting. We went to see “Lion King” - I admit, we had been brainwashed by Tokyo: in Shibuya, the advertisement for this movie was extreme and afterwards we had the feeling that we really should go an see this movie (hehe). So, after entering the movie room, we realized that everyone else was absolutely quiet. No one talked, even during the commercial section (which was so funny for us by the way as we didn’t understand anything and Japanese advertisement is always hectic, loud and crazy) and after the movie, everyone remain seated until the credits were over. Then, everybody left (of course, they took their trash with them. I wish German people would behave like this!), of course very quietly. No one was talking about the movie or showing any emotion. Kind of interesting…

We also used the free time for some cultural events. Maybe you have heard from teamlab borderless, a group of artists, programmer, mathematicians and visual effect coordinators who are producing digital art and have a big museum in Tokyo? Niklas and I wanted to visit this museum, however our schedule in Tokyo was already very packed so we didn’t make it. But, the good news is, that they are currently running a “wandering exhibition” of their latest installments and this exhibition happened to be in Kanazawa last week. My Japanese friend Rumi invited us to visit the 21st Century Museum where the exhibition was held, so we got to see some stunning art work and enjoy the special atmosphere. They showed very elaborate animations in pitch black rooms, together with ambient music and lots of mirrors, which created an unique atmosphere. I felt as if I was transported into another world. So crazy! Have a look at the pictures! 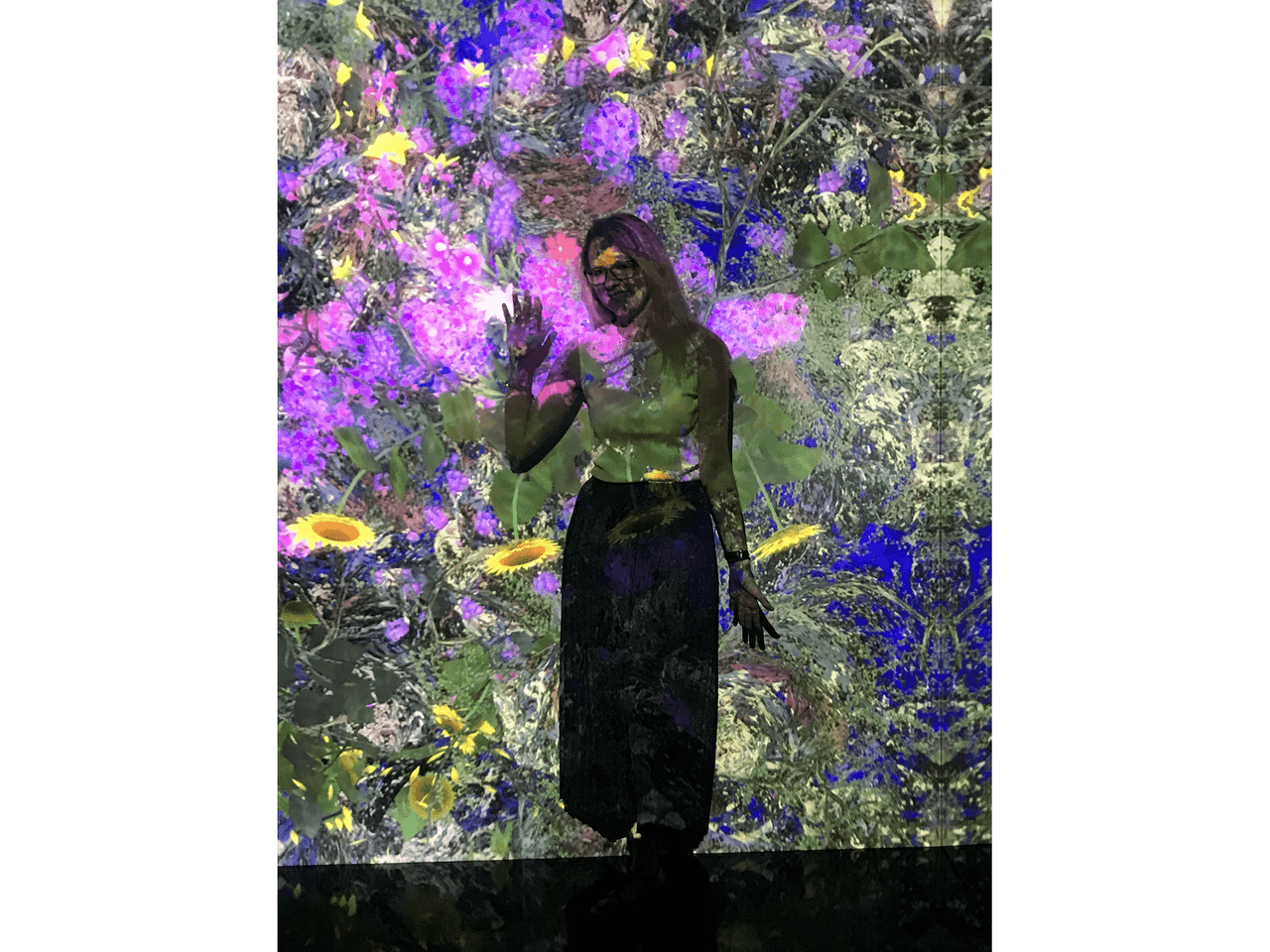 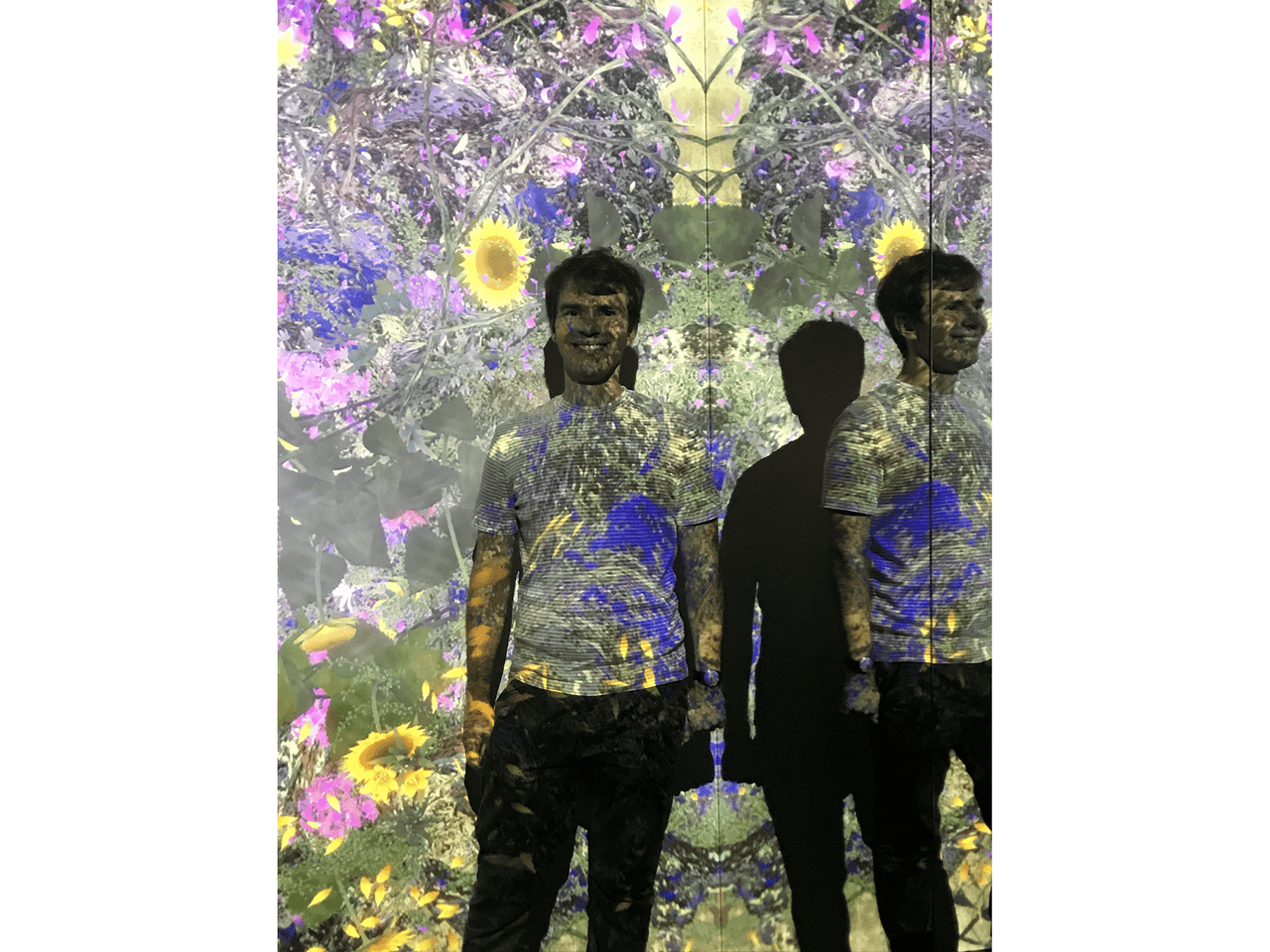 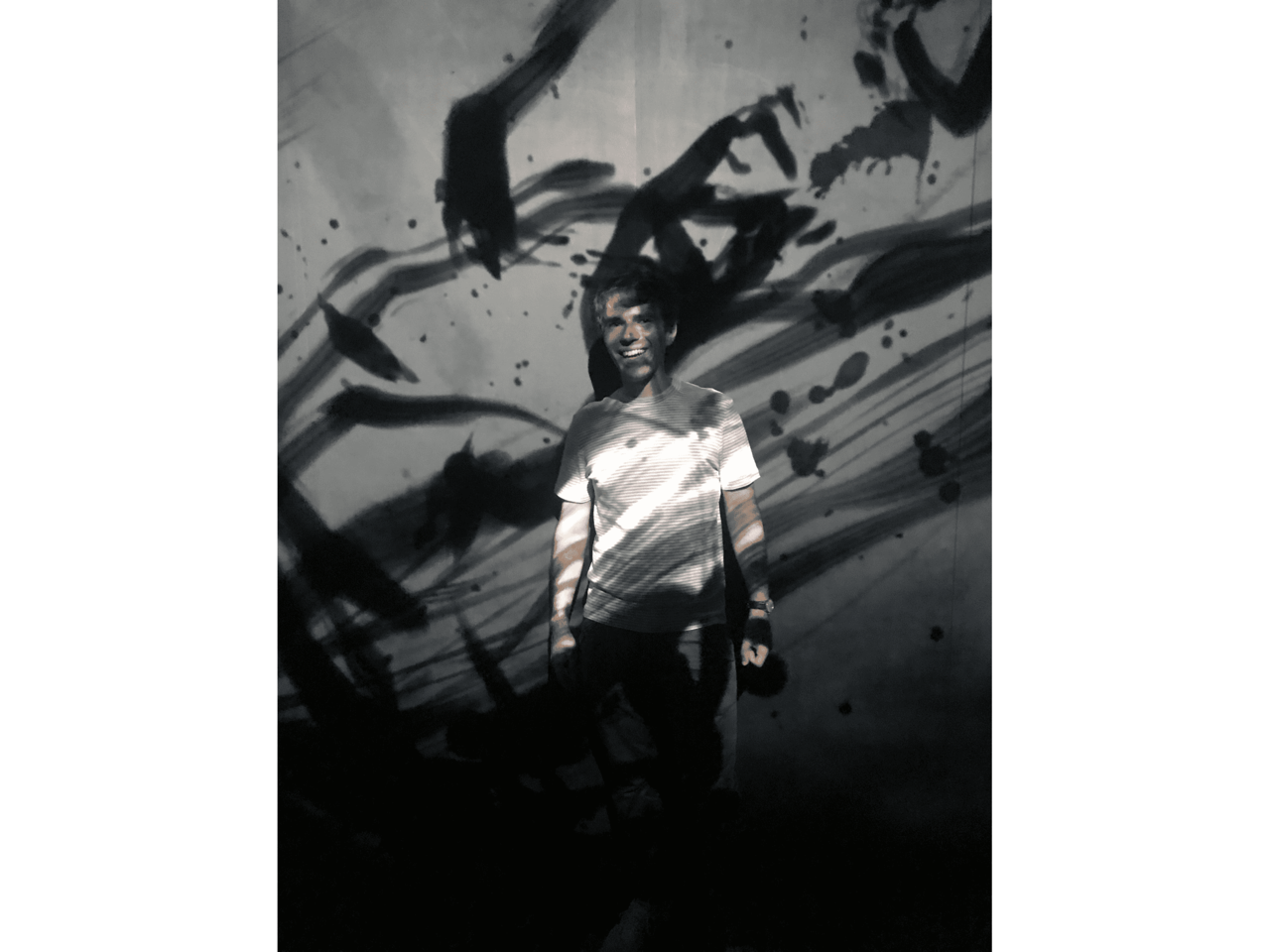 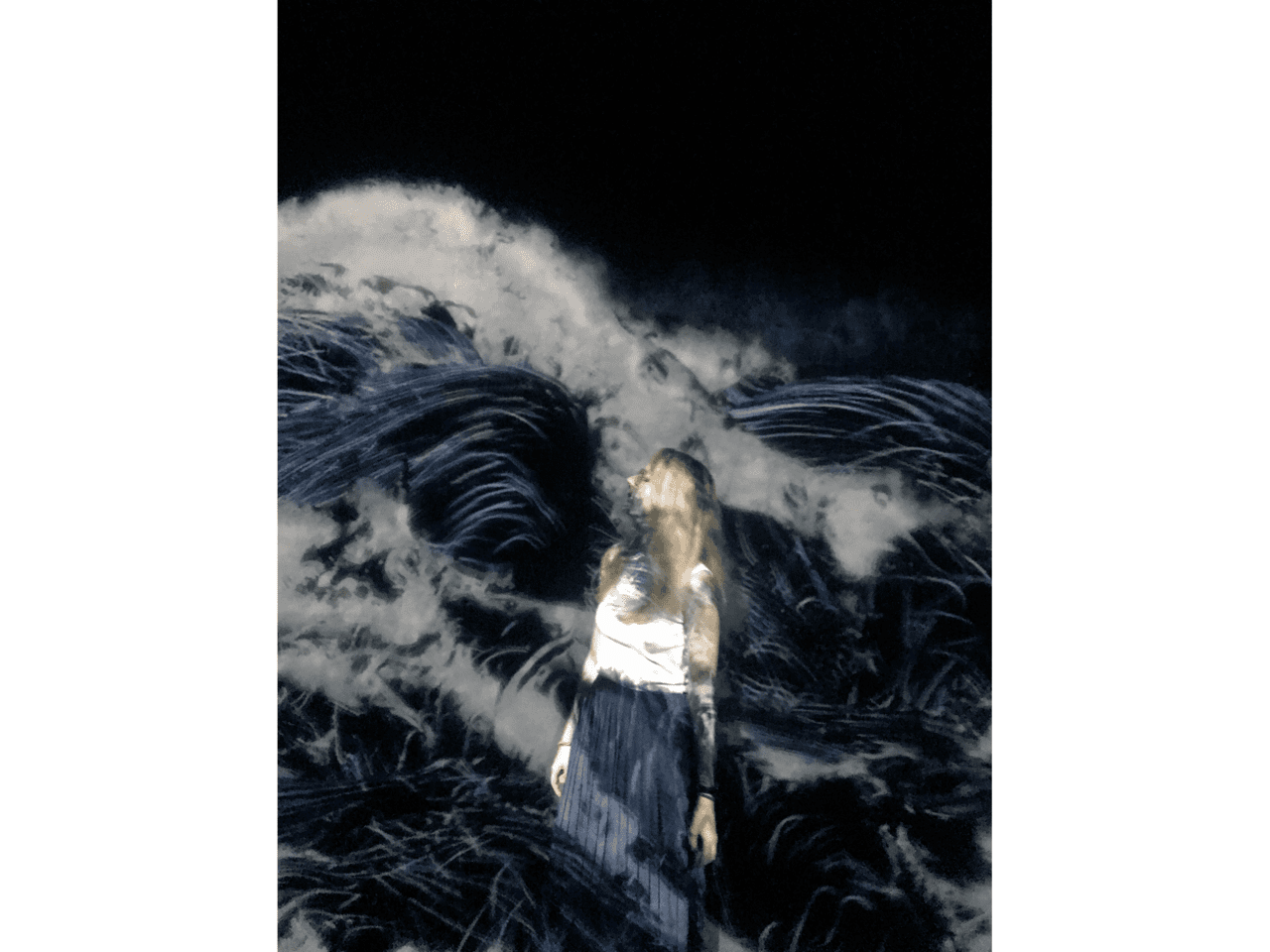 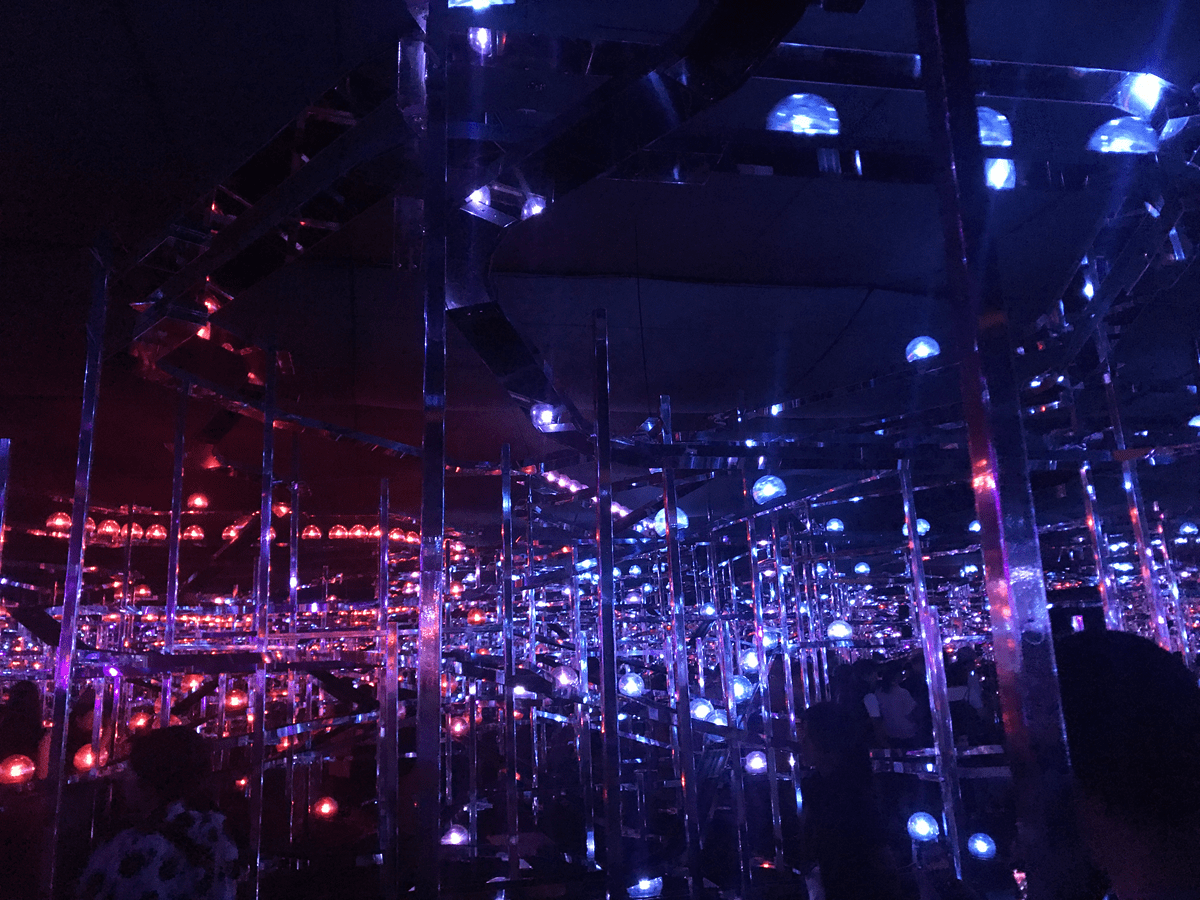 The latest installment: a room full of lightened bubbles, driving around on racks

Afterwards, we had some coffee at a cool Jazz Café where you can enjoy life music in the evening and went to a Yakiniku restaurant for dinner. It was delicious! Our friends ordered many tasty dishes (meat, fish, Korean side dishes I’ve never heard from before) and we enjoyed a funny dinner with lots of good food. And the obligatory food coma after dinner.

Some days later, I met with Yoko, the woman who conducted the voluntary guided tour for Marco, Laura, Mia and myself some weeks ago. We had stayed in contact as she works as counselor in a psychology related field and we had been chatting a lot about the differences between Japan and Germany regarding this profession. She surprised me with a plan to visit Kanazawa’s Edo Village. It is a short drive away in the mountains and is a really special heritage site. Nine original houses of the Edo era from Ishikawa (the prefecture where we live) had been deconstructed from their original place and brought to the Edo village premises. Now, you can visit all houses in one place and they are preserved for the future. Yoko and I visited three houses of former wealthy merchants and she told me a lot about the different functions of the rooms, the different classes at that time and their respective tasks and we even dressed up as typical visitors during that time. 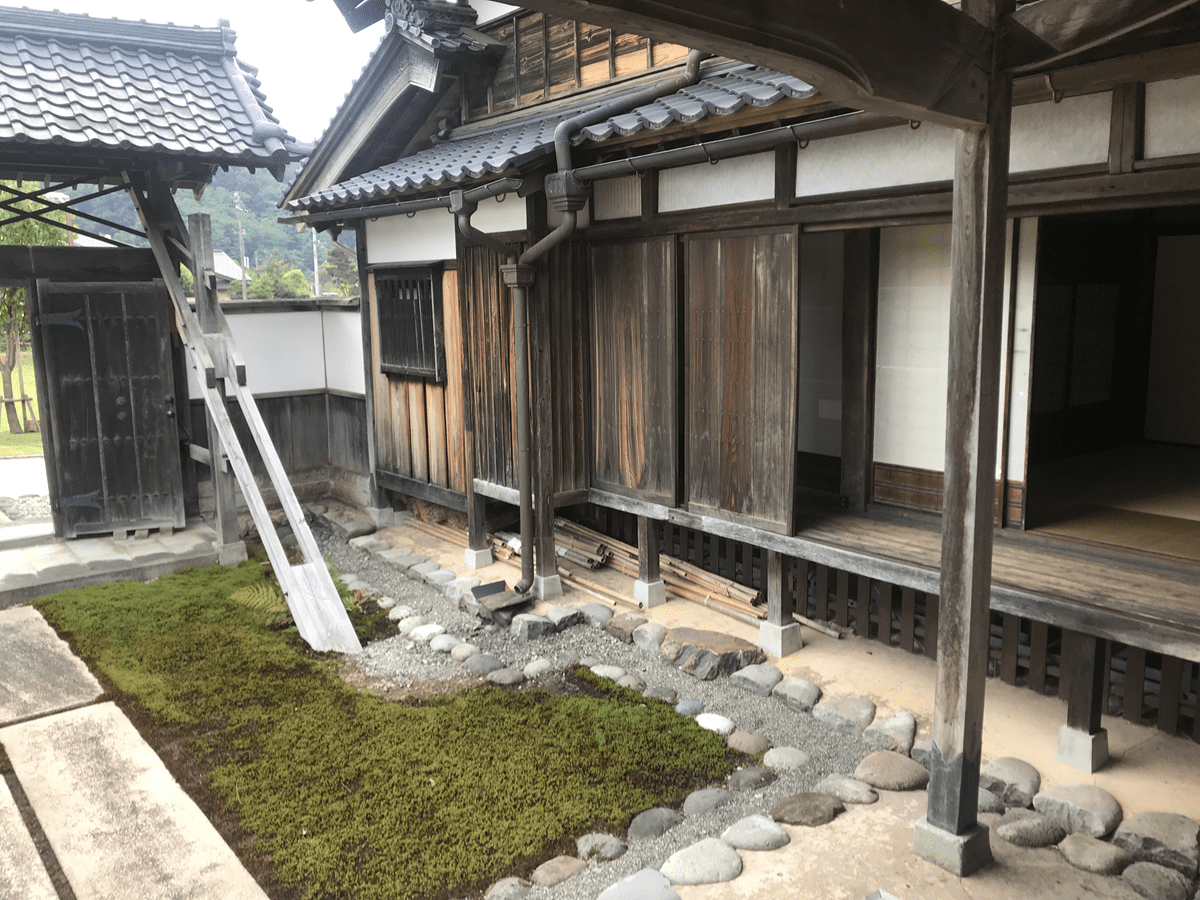 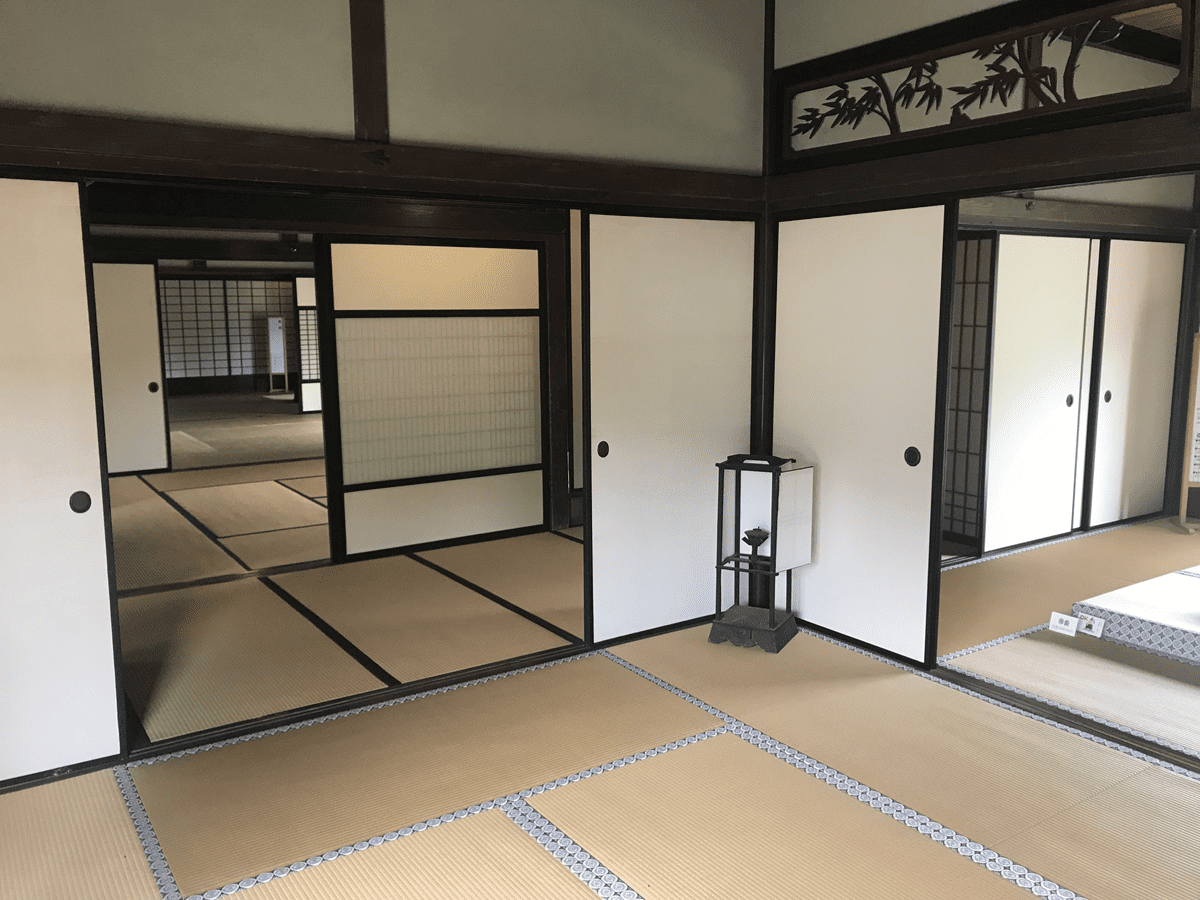 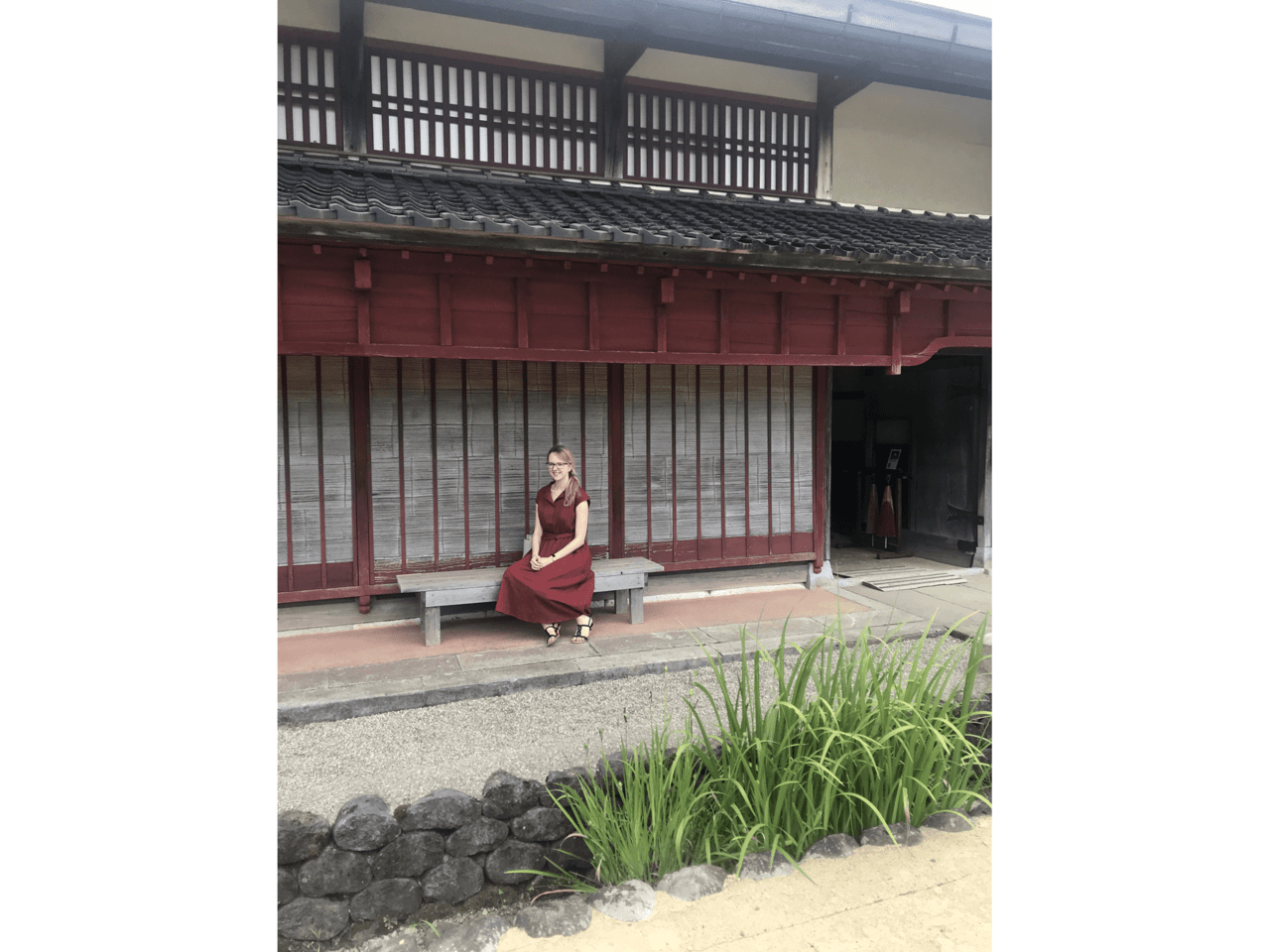 Me sitting in front of a former merchant house. The red color shows that the owner was very wealthy and kind of eccentric

It was so funny and I learned a lot. Afterwards, we had some sushi for lunch. Tasty! 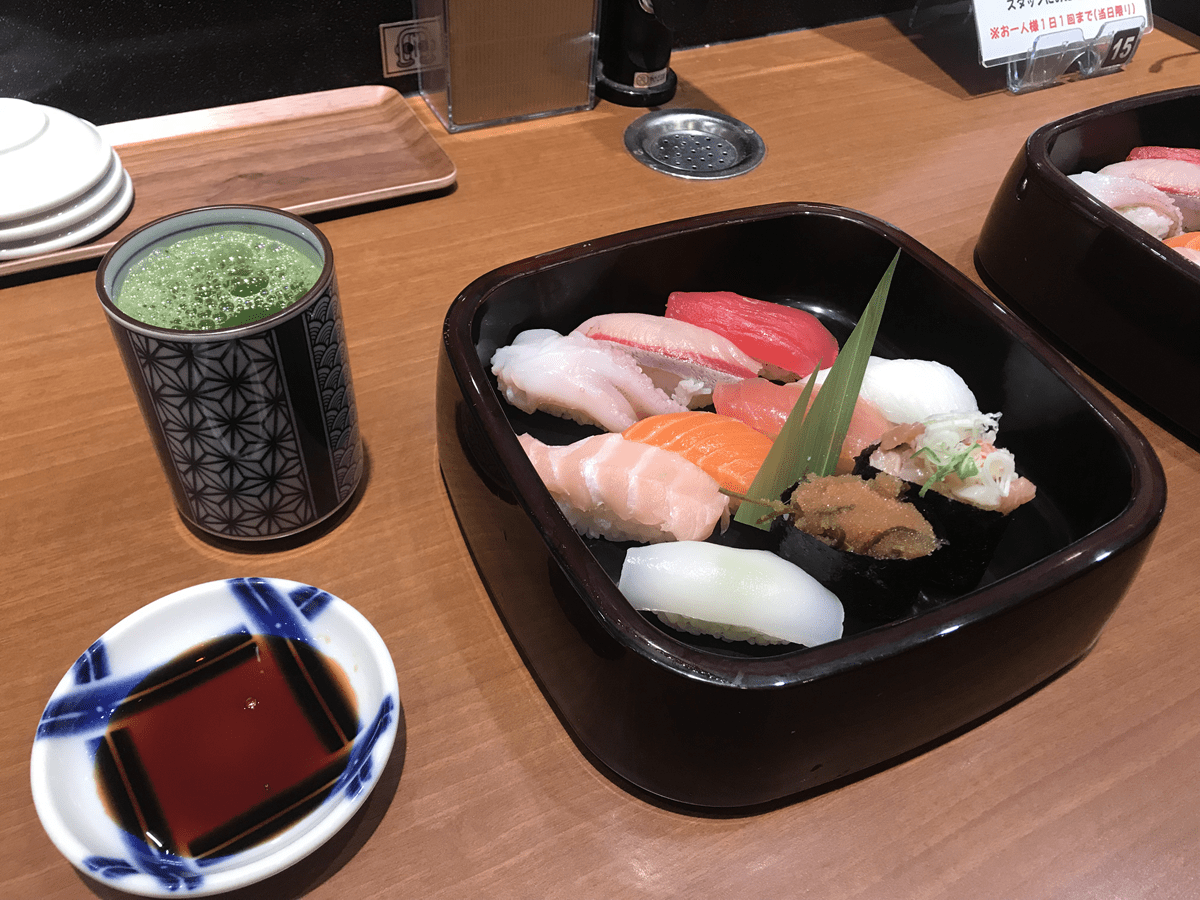 And finally, Niklas and I will enroll in a Japanese intensive language course which will start at the beginning of September and last one month! So, every weekday we will have 90 minutes of training for four weeks. Phew! This will be challenging. Currently, I am having private lessons at this school and try to improve my grammatical knowledge. The teacher, Ishimura san, is very good and the lessons are so much fun! I am looking forward to the intensive course. It will also be interesting for us since we both will be the only participants so far. I am sure our competitive natures will rise very soon… hehe… 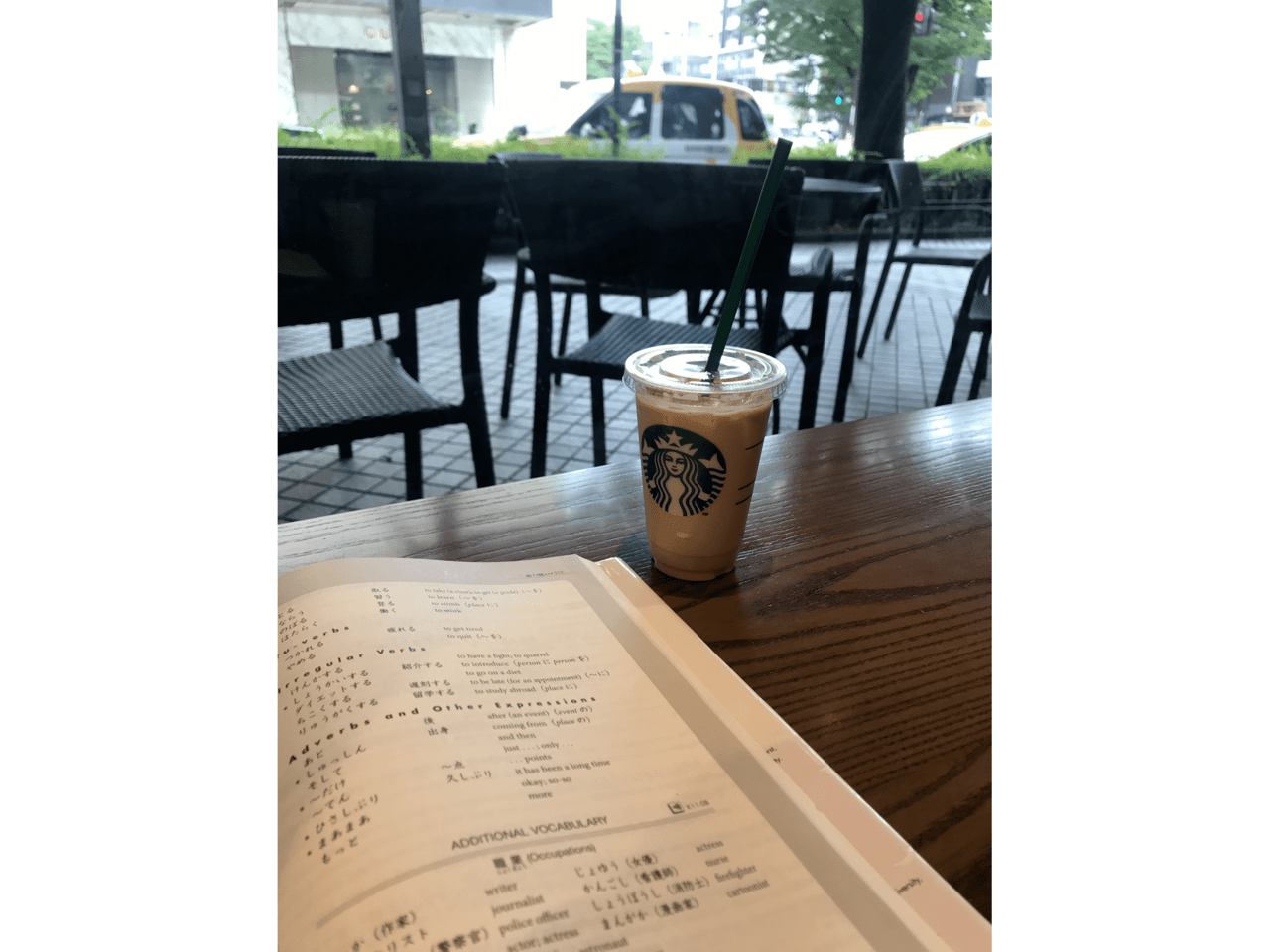 Studying while waiting for the lessons. Product placement not intended ;-)

As the heatwave seems to get better since yesterday (cozy temperatures about 28 degrees and jay, the rain is back…) we have been starting to plan our next trips. In the next post, I will tell you all about our trip to Takayama and the Japanese alps! Stay tuned for stories about this old town and for pictures from the mountains. Let’s hope it doesn’t rain too much!

Let’s talk about bicycle riding in Japan today. Biking is very popular, here in Kanazawa you can see so many people riding their bikes, even if it’s raining! Of course I also wanted a bike as I wanted to be independent form bus timetables. Buying a bike was not easy and I needed the help of Tomomi, Professor Notsus wife, to achieve it. In Japan, you not only buy the bike but also get registered in a list for the police (e.g. if you bike gets stolen, which I doubt will ever happen, the police has the bike’s number and can track it down) and you have to get a mandatory bike insurance. It was a lot of paperwork for me and I had to sign many forms! I also received a manual that describes how to ride your bike properly. So far, I have seen no one who complies to all these rules! However, I am now able to move around on an independent basis. Of course, if it is not raining like hell - or hot as hell. Besides the crazy weather, there are some other factors that make biking a little bit challenging.

First of all, you have to drive on the left side because in Japan, the system is left-orientated (just like UK). You have to be very focused to abide to all the rules and switch the sides in your head while riding your bike. Additionally, there are nearly no bike lanes in Kanazawa, even though there are so many people using the bikes! You can either drive on the street together with all cars which is dangerous because there is almost no space for bikers and the cars will pass you always very narrowly and fast! But driving on the sidewalk (which is officially recommended by the way) is also difficult because often, the sidewalks are too narrow for a bike and you can’t pass the pedestrians without crashing into them.

Oh, and have fun with all the hills here, because they can be very steep and you have to be very fit to master them! And, lastly, though Japanese people love rules and regulations and abide to them happily this is not the case for biking! Everyone seems to drive around how he/she wants, not complying to any of the rules I was taught at biking school as a kid (e.g. be careful when there are pedestrians on the sidewalk while driving there. I can’t tell you how often I was nearly run over by a bike on the sidewalk!) or in this Japanese manual. So, you not only need to concentrate regarding the “I have to drive left” situation, no you also have to pay attention for other crazy bikers who will run you over if you are not careful enough!