Hey everyone, I hope you are enjoying the pre holiday spirit and are not too caught up in all the related activities and social gatherings! As the year nears its end, the number of dates and appointments always seems to increase enormously. This also applies to us, even though we are not at home in Europe. But we already received some invitations for year end parties (“Bonenkai”), classical concerts and dinners. Also, while writing this, Niklas is already in Kyoto for a conference and I will be soon following him to spend some nice winter days in this beautiful city.

Before I give you an update about our current plans, let’s first discuss our Japanese test. Last time I told you that we were about to take the Japanese Language Proficiency Test called JLPT and now I want to give you a short update on how it went. It was truly an experience… Lucky for us, our designated test site was in Kanazawa city, directly next to the Omicho fish market in a large conference building. As we arrived, there was already a huge crowd of people gathering in front of the entry as well at the nearby 7Eleven store (apparently, everyone had the same idea: to get food, snacks and a coffee before the next four hours of test). As food and drinks during the test were not allowed, only in the short break times, I prepared myself as best as I could with a lot of onigiri, water and chocolate. And I was glad that I bought all these things because the breaks were too short to go out for purchasing anything! 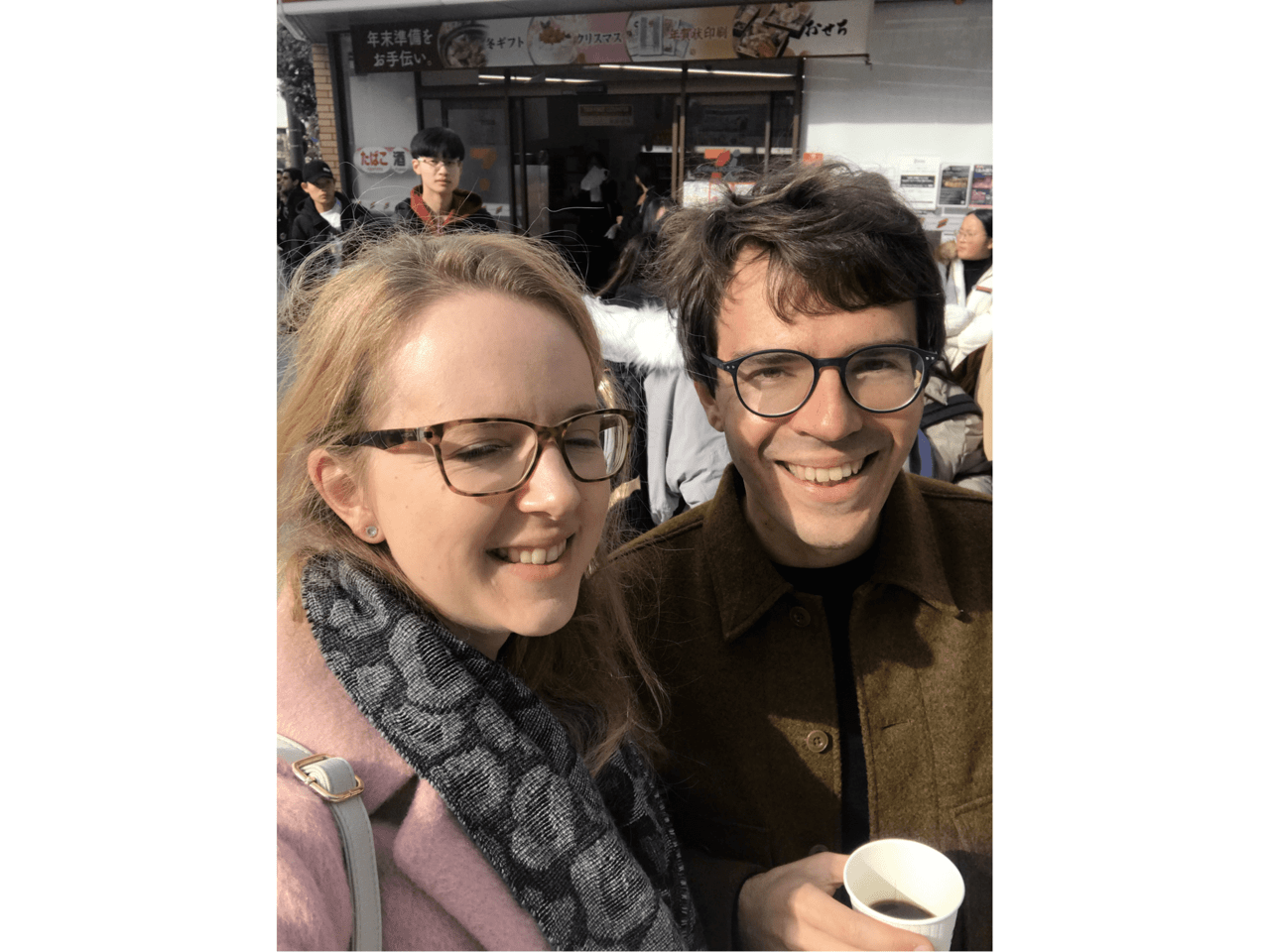 As it was sunny, my eyes are closed. :D But we look so confident in this one, so I decided that I want to post it. The contrast to the “After” picture will be great!

Niklas and I were assigned to the same classroom, but we were sitting at different tables. With us, about 40 people were attending the N5 Level Test in our room. Most of them were Chinese or Vietnamese, we were the only non-Asian people in the room. We were also surprised how many there were as we only took the lowest level available and were sure that most people would take the tests for higher levels. But, we didn’t have time to think about that too long - the preparation time kept us busy because of the many rules we had to follow. Let me tell you some of them: you were not allowed to put your coat over the chair, it had to be stored under your chair (as well as everything you brought with you). As soon as it was lying not directly there, one of the staff members “friendly” reminded you of removing it immediately. I was wearing a scarf and got scolded very badly because of that. To be honest, I didn’t understand why as the staff was only speaking Japanese and I only understood that it was forbidden, but not why. :D You were also only allowed to have on pencil on your desk, nothing else! I had some tissues on my desk so you can imagine, what happened. Yes, I got scolded again. Whew…

In general, the staff was extremely strict. Every wrong behavior was told off immediately and they were not nice while doing so. Also, they only spoke in Japanese so most people didn’t really understand all rules and therefore behaved incorrectly sometimes. In my opinion, this is not fair as the tested level was the lowest one and not many people on this level are good at understanding complex phrases. But, rules are rules, so there was no point in discussing with any of the staff members. The test itself consisted of three sections: Vocabulary, grammar and reading and, at the end, listening. During the tests you could receive a yellow or red card for breaking important rules. Luckily, I didn’t' receive anything but I was very scared to look around or make any noise as this could easily result in getting a yellow card. In the break time, I tried to relax as much as possible and to eat my snacks without getting scolded again because of some absurd rule I broke. To be honest, I’ve never experienced such a strict atmosphere. It was no pleasure for us to take the test at all! Oh and by the way, some parts of it were very difficult. We studied hard before but still there were some questions that were tough to answer. So this test also managed to completely destroy your confidence in your language ability after five minutes… We will receive our results in two months, so let’s hope we did pass! It was truly an adventure and I am still glad that I was brave enough to do it. But it was no fun! 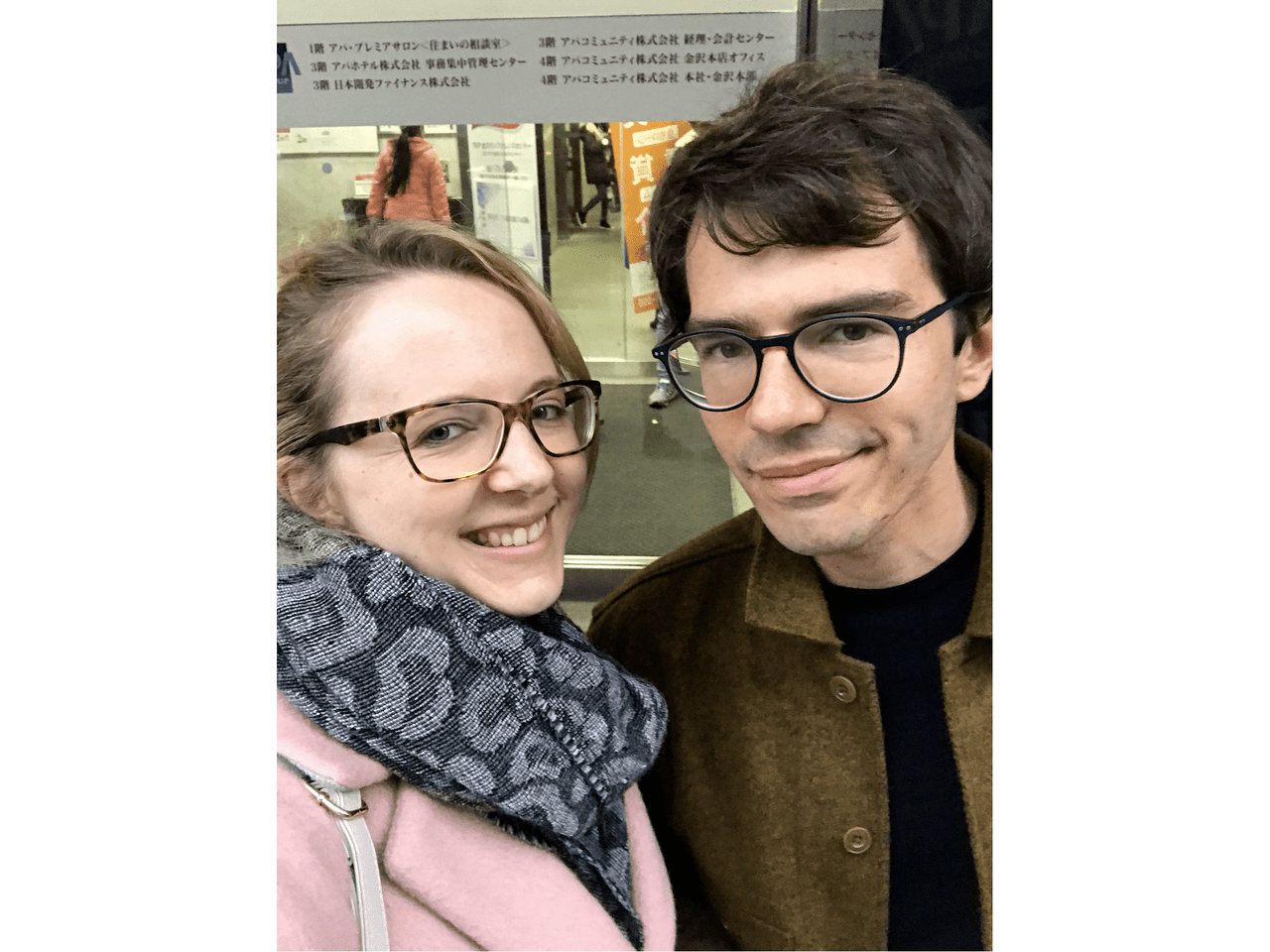 For everyone preparing for JLPT: buy the preparation book and try to prepare for the exact test format! If I would do the test again, I would invest in the book and then work with it until I know how to best react to this crazy detailed questions. Also, keep in mind, that it’s not only the content but it’s the atmosphere that will really freak you out at some point and demotivate you. Four hours are a long time and staying focused all the time is difficult. So try to use the breaks to get some fresh air and drink a lot of water. If you are mentally prepared for that, you will manage.

How is winter so far treating us?

Until now, we are living through a very diverse December. Right at the beginning, the predicted winter storms had been rolling over Kanazawa, bringing heavy rain, hail showers and strong winds with them. Being outside during this weather is not pleasant! For days, it was so stormy, you could hardly go out without getting super wet. Wearing the wrongs shoes can turn your day into misery… 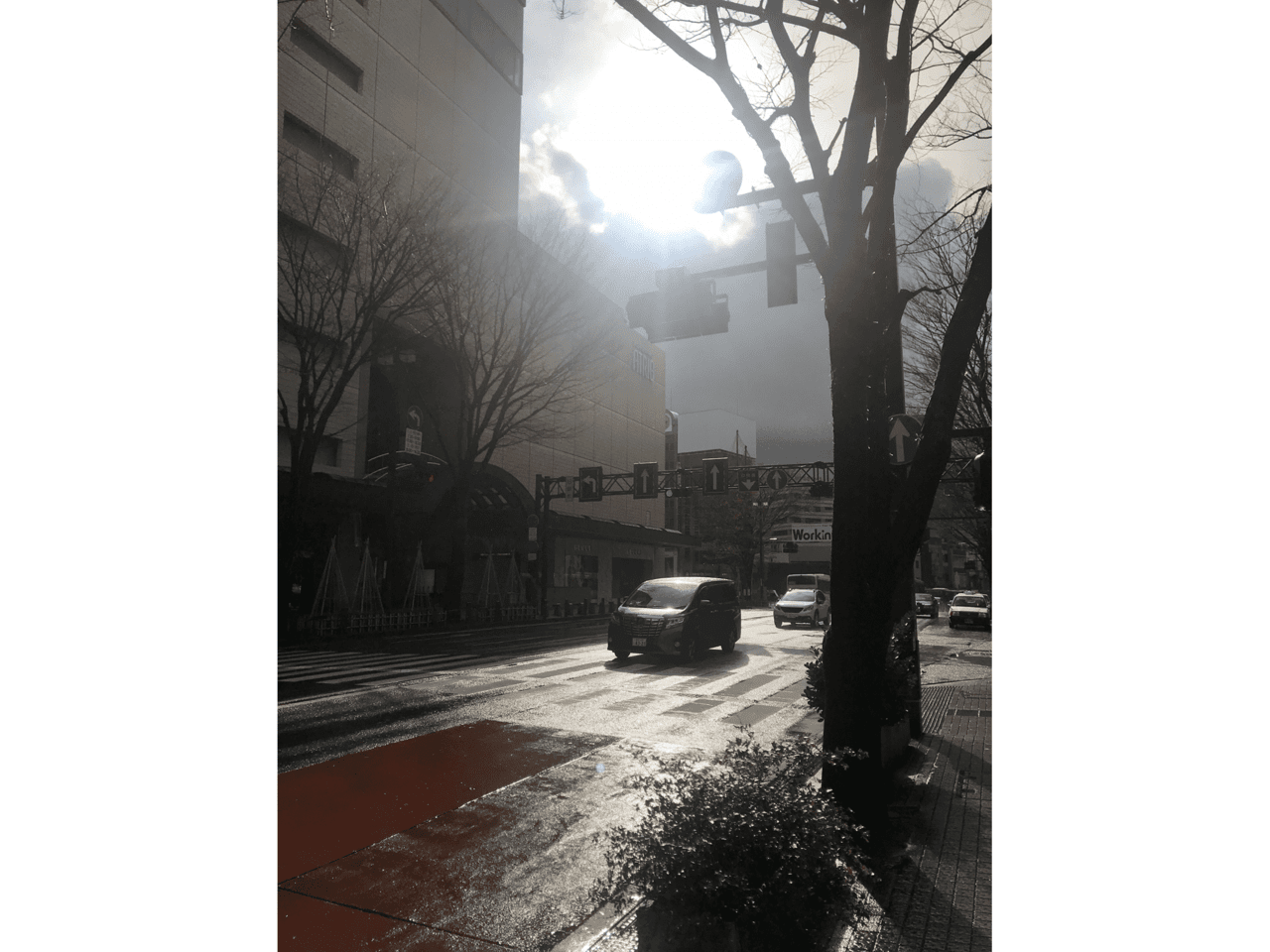 One minute of sun in between heavy hail storms - gloomy atmosphere

Luckily, after the storms calmed down, the sun came back and we had some nice cold days with a lot of sun. So far, no snow has fallen over Kanazawa, but the mountains at the horizon that I can see from our window, are covered in snow. This looks quite charming. I am really curious how this will continue. Our Japanese friends now all changed their tires and the city started to prepare precious trees and buildings for the upcoming snow. So I really hope we will have white Christmas days! Even with bad weather, we try to go out, although the temptation to stay home is very high. I had lunch with Risa and Saori at the ANA Hotel restaurant that is on the 18th floor. There, you have perfect view over the whole city and as it was sunny for a while, we could see the mountains and the sea! Also, the food was very good so I will go back again! 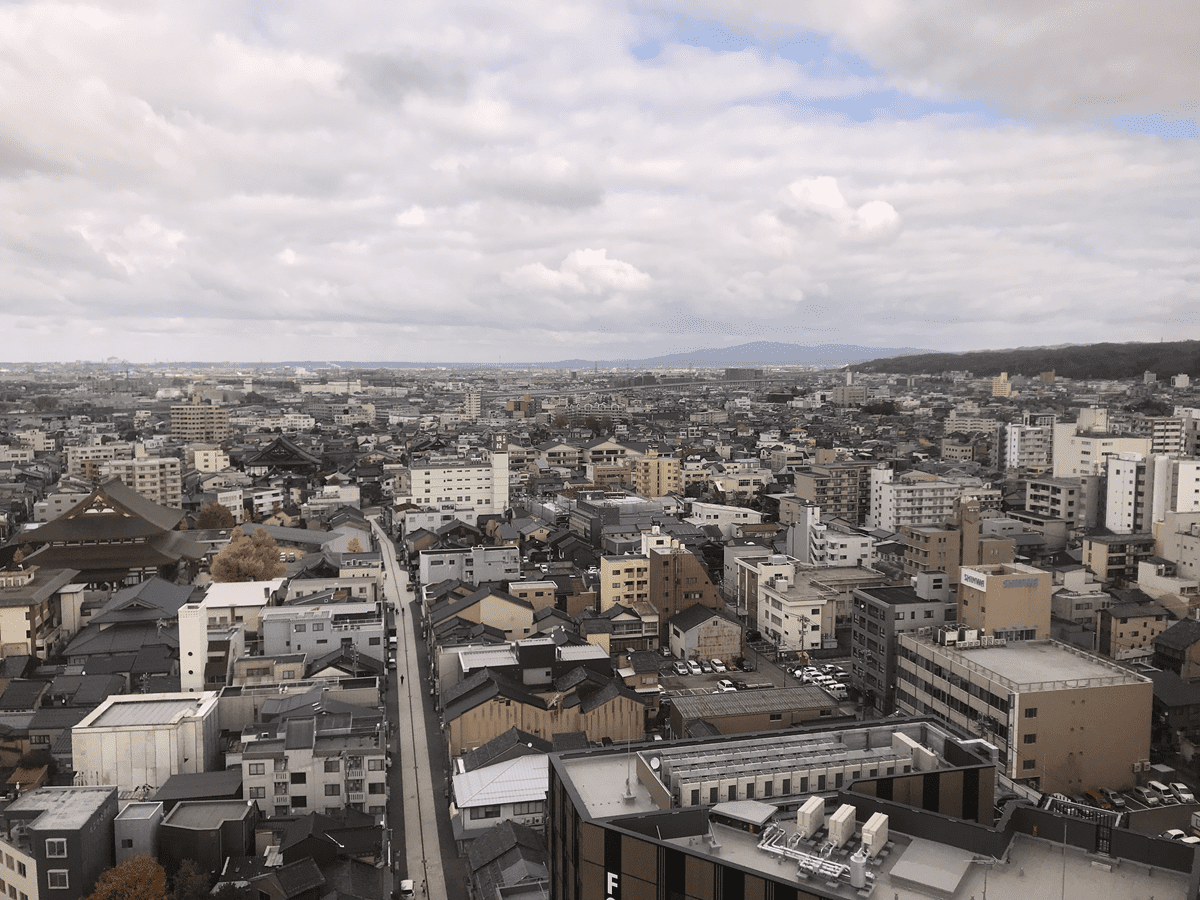 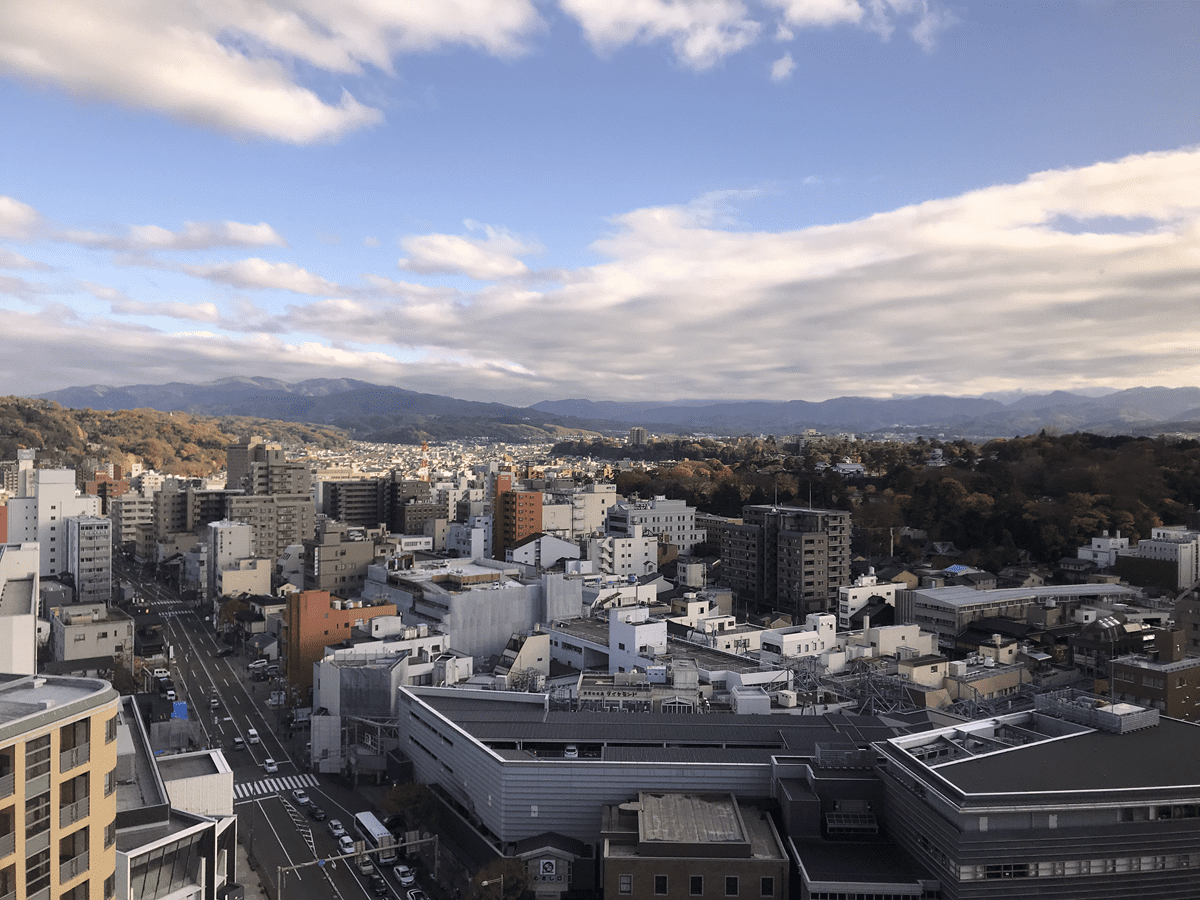 Last weekend we had some fun visiting various bars and enjoying the Kanazawa night life. It was also the first time that I went to a Yakitori restaurant and it was so good! Yakitori are skewers (usually meat combined with leek but there are also some vegetables only versions) that are a popular bar food and are so delicious. If you go to Japan, you have to try it. Going out in Katamachi, Kanazawa’s “party area”, is really fun but the bars are often so tiny that you need to try out a lot to find a place. If you are prepared for that, it’s really fun! We also tried a German styled bar called “Bitte” and Niklas was happy to drink some Erdinger Weißbier while I enjoyed Henkell Trocken from Germany! Very nice. 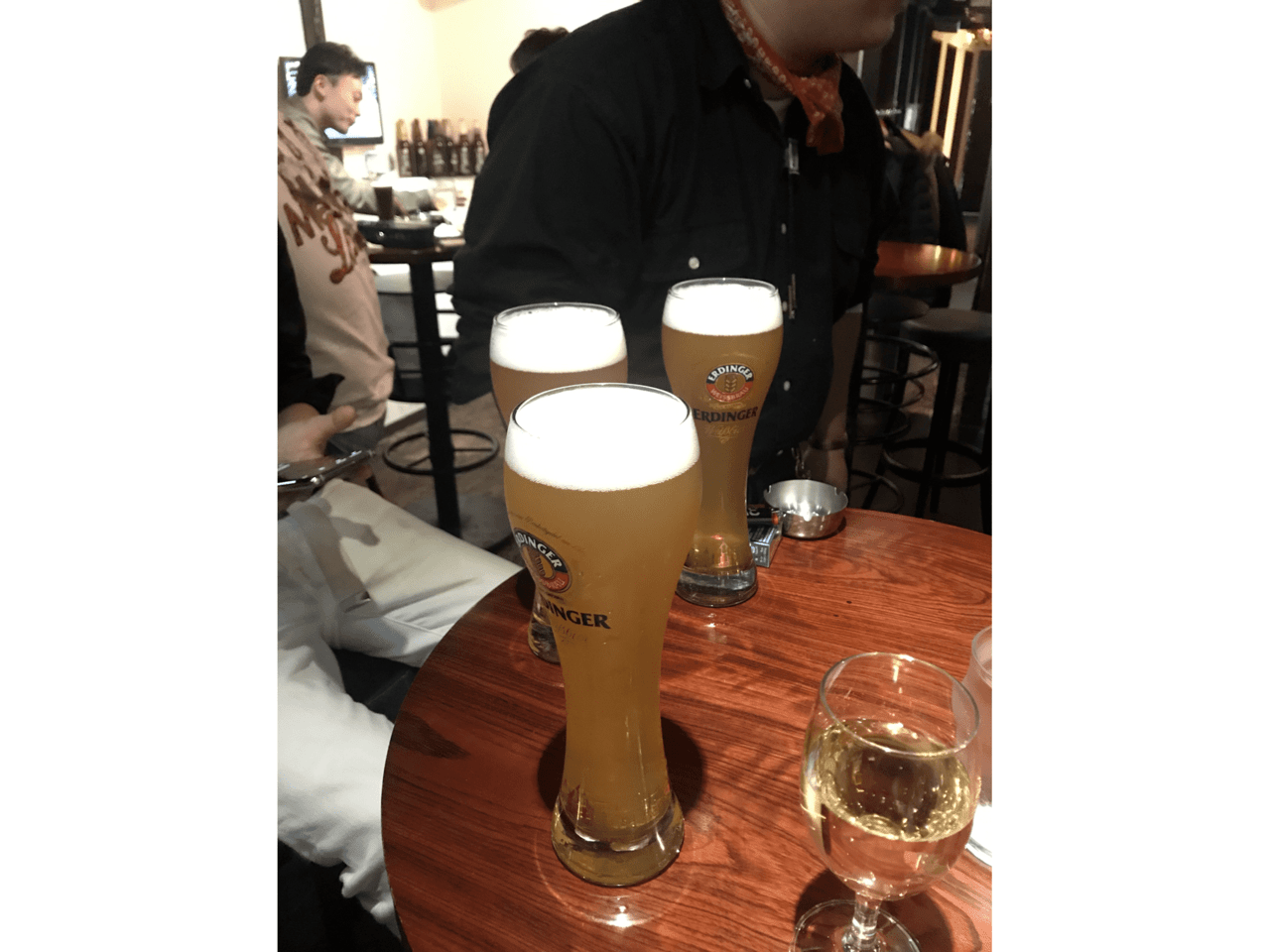 Also, as a new year is approaching, I decided to change my hair color and now have darker hair! A big change but so far I really like it. Also, the blond was bleaching out so fast, the Japanese sun is just too strong for my European hair…

Last time I told you that Christmas is a hot topic in Japan. So after surviving the JLPT, we decided to get ourselves a reward and buy some nice decoration for our home to enjoy some of the holiday spirit. Thanks to my grandparents, we also had received a small package of German Christmas cake (Lebkuchen - soo delicious, thank you!!) and small decorative items. Together with our purchased Japanese stuff, we now have some nice Christmas corners in our apartment. 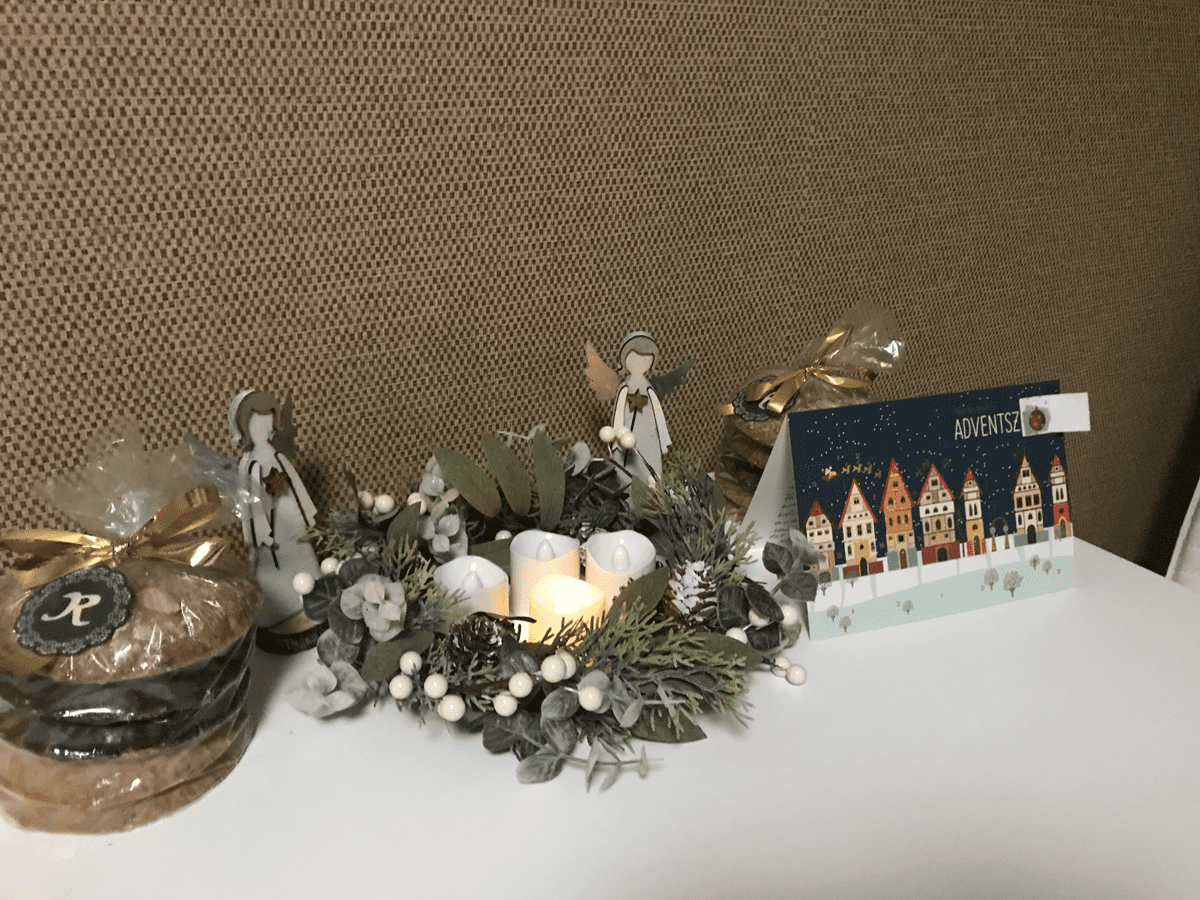 Our wreath is made from plastic and the candles are LED - but we are happy that we could create something traditional from home and we enjoy it, especially with the nice angels at the side (thanks Grandma!) and the Lebkuchen (they are already eaten…) 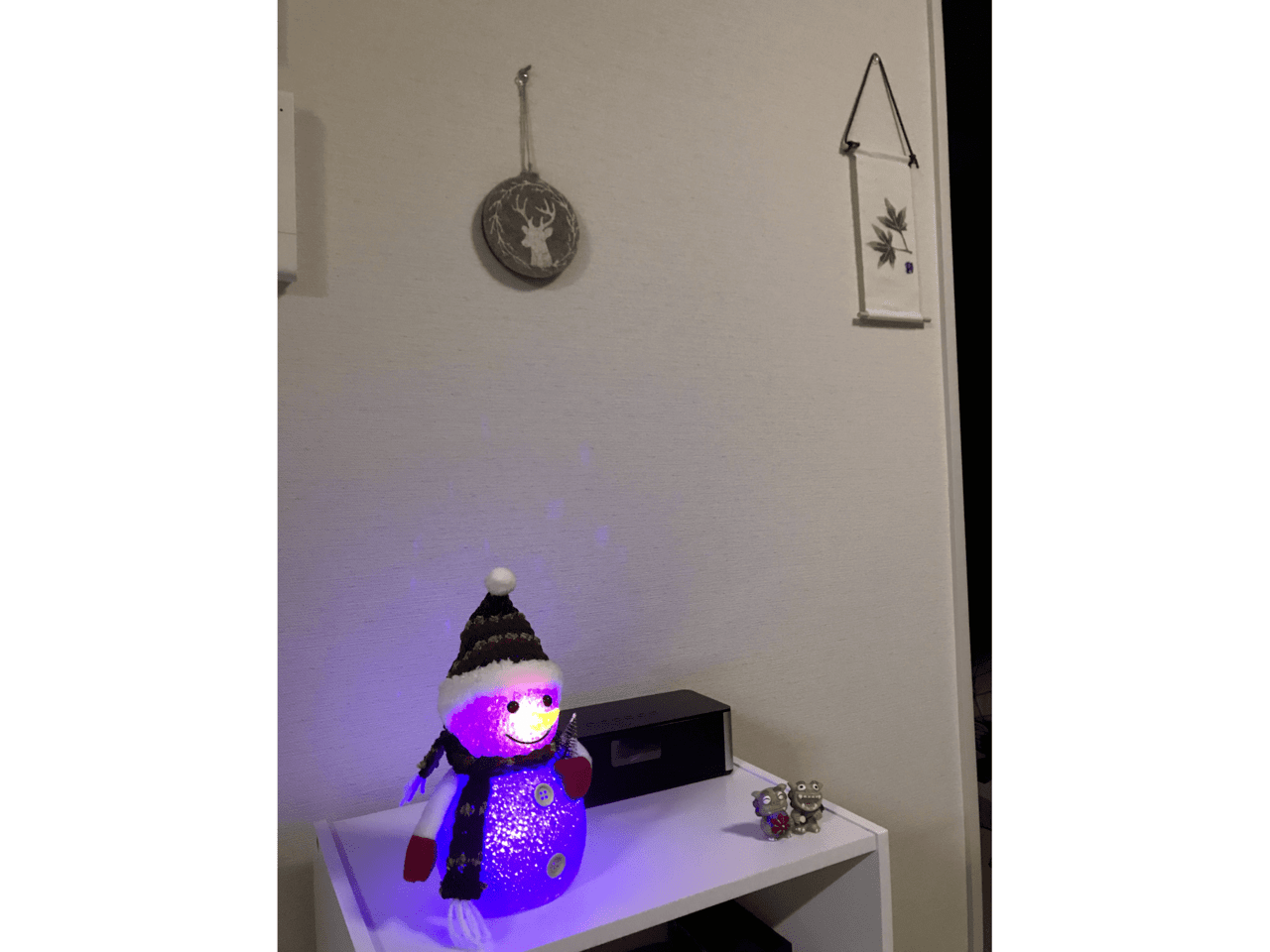 Oh and I also bought a gum tree for our living room so that we at least have one plant at our home. And maybe I will decorate it for Christmas as well, as we don’t have a real Christmas tree here. In Japan, if you want to have a real tree, you can only buy a plastic tree with various blinking lights.

You can see, we are getting ready for the holidays. We also sent out some packages to our families (let’s hope they will arrive in time) and I can say, sending something out of Japan requires time and patience. Every single word on our customs declaration was carefully scanned and discussed and after some dramatic minutes where we feared that we’d have to unpack everything, our packages were cleared and stored away. Phew!

I’ll be off to Kyoto to meet Niklas and you can be sure that a blog post about our trip there will follow! I am excited to finally go there, all our visitors had been enjoying the city and the various cultural sites, so you can guess that I am also very curious. Afterwards, we will prepare our fist Christmas in Japan and I am looking forward to tell you about that, too. 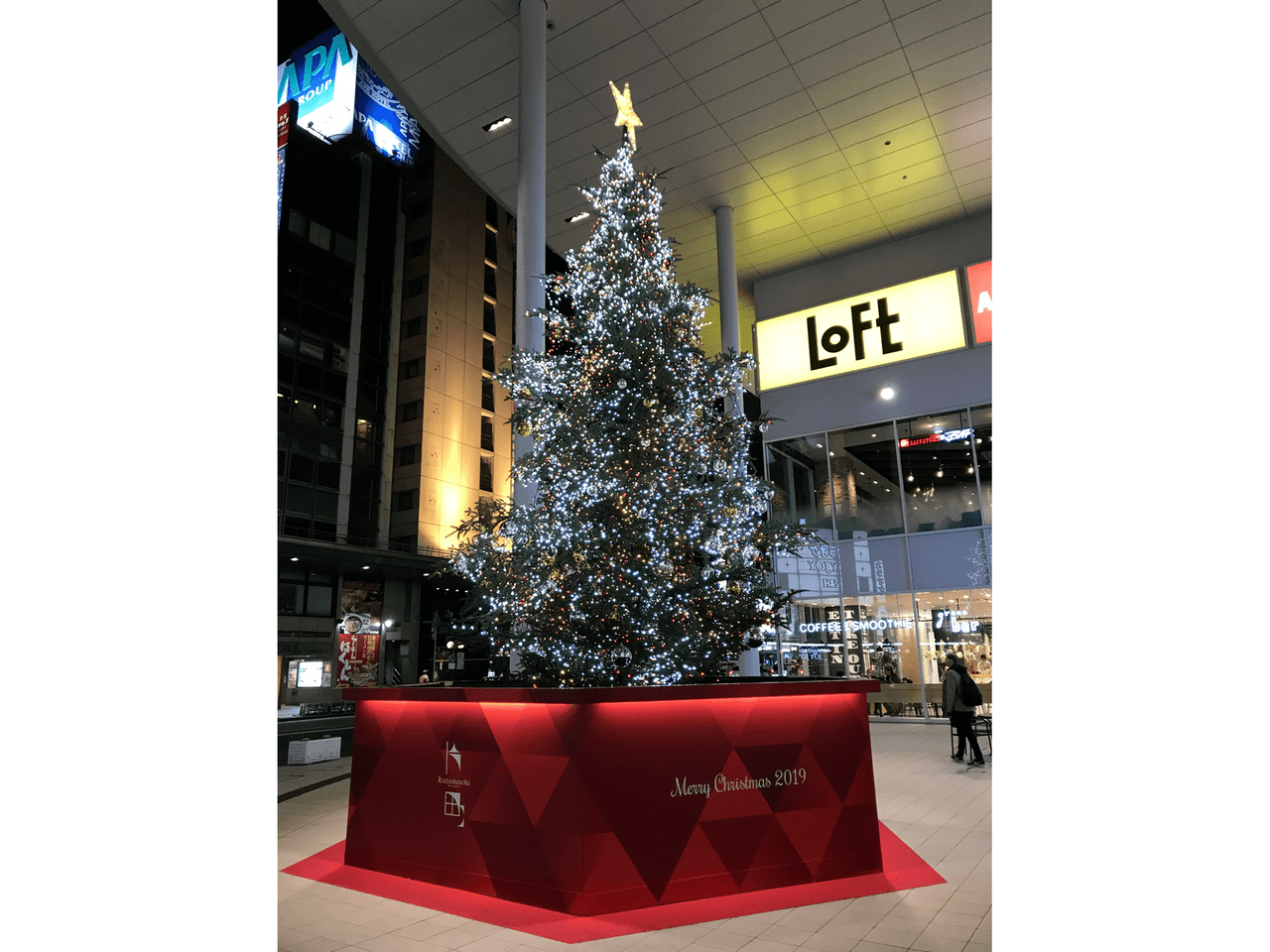